It was unveiled recently the druid changes for Cata and there are certainly mixed reactions within the community.

For the restos, a few things were announced. Some weren't wholly unexpected and some where a little "meh".

Let's just get this one out of the way. A few months ago, Blizz said they regretted having their players not show off their armor designs and hide behind forms. The rational behind making tree form a cooldown instead of a shapeshift was not only designer ego (imo) but also to give restos offensive capabilities like all the other healers. I disagree with this line of thinking. Maybe because of the pvp aspect it is cumbersome, but for a pve player I do not find it all that bad, especially since they made slight changes to the overall mechanic already.

So let's take a look at what is actually stated:

"Tree of Life is changing from a passive talent to a cooldown-based talent, similar to Metamorphosis. Mechanically, it feels unfair for a druid to have to give up so much offense and utility in order to be just as good at healing as the other classes who are not asked to make that trade. We are exploring the exact benefit the druid gets from Tree of Life. It could strictly be better healing, or it could be that each heal behaves slightly different. You also will not be able to be banished in Tree of Life form (this will probably be true of Metamorphosis as well). Additionally, we would like to update the Tree of Life model so that it feels more exciting when you do decide to go into that form. Our feeling is that druids rarely actually get to show off their armor, so it would be nice to have at least one spec that looked like a night elf or tauren (and soon troll or worgen) for most of the time."

Every time this topic comes up, I think back to the Shadow Priest. Now, I don't wish to screw the SPs over; Blizz has been doing (enter sarcasm here) a good enough job fiddling with the class already . What strikes me is the line of reasoning applied to druids is not conversely applied to the SP. Is it not "unfair" to the Shadow Priest to not be able to dps and help heal like an Elemental Shaman? Or is the Moonkin form trumping that altogether?

Regrowth and an interactive mechanic

"Restoration druids will have a new talent called Efflorescence, which causes a bed of healing flora to sprout beneath targets that are critically healed by Regrowth."

Hmm, so they wish to bring back regrowth into a larger prominence? Some of us knew that a forced use of regrowth was happening, but without more information, it is hard to see what exactly this mechanic may do. It is a HoT? Is it an PBAOE thing? Actually, now that I think about it, I think it would be awesome to have a PBAOE mechanic into our hots. Shamans get a Heal Rain spell so having something that is a tight, small radius hot that acts differently than WG would be neat and be great into the Tank Healing or Melee Healing role.

"All heal-over-time spells (HoTs) will benefit from crit and haste innately in Cataclysm. Hasted HoTs do not reduce their duration, but instead add additional HoT ticks. Haste will also benefit Energy generation while in cat form."

This, I like a lot. Not much more to say about this except yay for the kitties! I expect though this will not be a huge amount of love for the Cats as Blizzard has a tendency to want to keep Cats in the middle of the pack (pun not intended) as far as dps meters. I expect this haste to be balanced out by something else later.

"Unlike the other healers, Restoration druids will not be receiving any new spells. They have plenty to work with already, and our challenge instead is to make sure all of them have a well-defined niche. A druid should be able to tank-heal with stacks of Lifebloom, spot-heal a group with Nourish and Regrowth, and top off lightly wounded targets with Rejuvenation."

We do have a lot of tools in our tool boxes and am happy there won't be something new to add. However, they do need to keep the class fresh or we will start to get bored. I am curious about the wording used, though.

Tank-heal with stacks of Lifebloom reminds me of BC days and rolling. What I think actually makes greater tank healing is the use of managed hots with Nourish.

Spot healing a group with regrowth and nourish. Now I am starting to get a complex and think maybe I am doing things wrong. Spot healing a group for me means a combination of WG along with something else, depending on the type of damage and the situation. It is strange to me that Wild Growth isn't really mentioned at all. Maybe I am reading too much into things.

Top off lightly wounded targets with Rejuv. Again, interesting wording choice here. Rejuv is very powerful right now. Depending on the Glyph and gear etc, Rejuv can be a great blanket for consistent damage or solid fast hot for heated encounters. If I wanted to top off a lightly wounded target, I would use Nourish or WG, not Rejuv because of wasted ticks. Again, I am beginning to think I am doing things all wrong now if this is how they see the roles of our spells.

"Druids will lose Abolish Poison with the dispel mechanics change, but Restoration druids will gain Dispel Magic (on friendly targets) as a talent. All druids can still remove poisons with Cure Poison and remove curses with Remove Curse"

Of of the things Abolish Poison had going for it was its ability to be sustained. This seems rather vital in a pvp situation as hunters and rogues can apply a variety of poisons in quick sucession.

Cure poison is just one poison "counter" and yet costs the amount of mana as the Abolish version. In addition, it is not a cure over time so for encounters similar to Naxx, you will not be able to cast and leave it which would normally free you to do other things.

So, more spamming, more mana drain. Color me excited... no.

Adding dispel magic is interesting. The dispel changes actually require its own post, so refraining from addition comments for now.

Finally, a message to Blizzard, with many thanks to Keeva 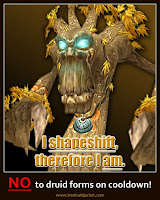 Good post. I have so many mixed feelings about the tree-on-CD thing. Although by "mixed," I mean, pour in 18 cups of "WTF" and then add in a pinch of "ok maybe, this won't be so bad."