News has been trickling in that the release of Cata will be December instead of November. For some, this is great news because they have more time to purge their banks, level those alts and complete those achievements. For others, it means another two months of stalling in ICC.


As a reminder of the expansion blues, one of our members last night made a telling comment.

He has 33/50 shards for his legendary. When it was pointed out that he didn't have much more to go, he replied something similar to I'd rather see new content than finish the sword.

I have been trying to keep up on the talent changes and new abilities in the mean time. I kind of feel lost, much like I did when WOTLK was arriving. Of course, Keeva is going to save the day with a guide to 4.0.

As confusing and scary as it may seem, it is important to pay attention to the writing on the wall and begin to adjust your play style. For myself, I know I use rejuv like it's bottomless, but in a raid I use all my spells just some more than others depending on the encounter (For example, nourish was my top spell last night on Dreamwalker but not so on Sindi). I know there are some druids who just Rejuv and WG. Others never really thought about when to roll LB and when to let it pop. With Blizz leveling the field once again between all types of healers, it is also crucial for us to be mindful of where we can excel and make the best use of our tools. If there is one thing that stands out with being a player of a druid is that we are flexible and quick to adapt. Hmm... game imitating life or the other way around?

Despite being in favor of changing our tree form model opposed to making it a cooldown, I do care about what the armor looks like. It could be that I spent months and many hours getting my first set which gave me a dead bird on my head. Then antlers and horns and more dead animals.

But, check this out!

Oh Blizz, I know this is just to help appease me and my anger over losing a permanent form. I have to admit, you had me at the wings. In your face wings. With sexy feathers floating down. Still a dead bird on my head, but the animation is HOT. What I don't quite get is three different colors. I see silvery green, brown, and dark blue sets. Everything is subject to change so I will keep an eye out for it, because I am obsessive like that.

Finally, if you follow MMO champion at all, you may have noticed Cynical Brit and his Cata videos. I am a new fan and highly encourage you to check his Youtube channel here. I respect those who want to remain spoiler free. I initially watched his Worgen vids largely because I knew I wasn't going to have time to make one right off the bat- not when I have a goblin to make! And a new troll! If you don't watch any of them, watch the Heroic Wipe video :)
at 11:12 AM No comments:

I like trolls. Of course, I only have one character that is a troll but the poor guys sitting on the beach make the best of their situation.

I knew a while ago that the trolls were going to take back Echo Isles and would need the help of the players. So, I logged in this morning to do my part.

For complete guide to the questline, may I suggest starting with this.

They see me rollin' 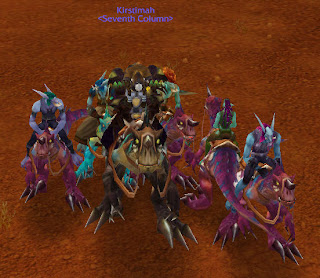 Felt pretty bad ass to be riding down the trail with my band of recruits. Of course, whenever there is a picture to be taken, someone is always facing the wrong way. 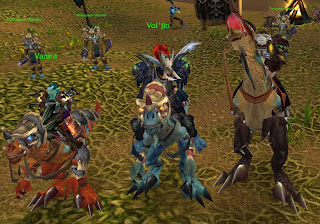 Just when things were looking pretty good with the new guys, now you saddle up with the head troll himself!

Ok, fun aside, here is some nitty gritty on the questlines themselves. I am sure you all have done your quests but here I go anyway.

First of all, there is a similar line done on the Alliance side which involves Gnomeregan. Both phase the area, which once again proves that this mechanic is one of the best ideas Blizz has come up with 6 years. Not only that, but it had a Taking of Undercity-style battle, which is why I was teamed up with Vol'jin. I suggest not doing this in Resto spec (which I did and it took forever) or at least hooking up with a buddy of some aoe specialty.

There is a gem of lore in the questlines that attempts to explain why we will soon have troll druids ("What? We've been here the whole time!"). Much like the An Injured Colleague quest, I feel it was pretty weak. I don't know if I saw any information on what trolls shapeshift into, but a tiger would be pretty sweet. I do hope they flesh things out as we get closer to Cata instead of a minor and easily overlooked questline and some NPC dialog.

Because Echo Isles will be the future home of the trolls after Mr. Grumpy- I mean Saurfang kicks them out of Org, this quest line will be a feat of strength and therefore a limited time only thing. The rewards are neat, which include a cloak with the Darkspear insignia (and no stats) and a bauble which allows you to change into a Darkspear warrior for 30 mins (4 hour cooldown). It fits nicely next to my haunted momento :)

Maybe you are in this situation:

Cata beta is trickling in, SC2 is in full swing, and you have done ICC for almost a friggin' year. Real life stuff starts to invade, seeing the opening created by your waning enthusiasm.

Maybe you are in school and spend a little more time on homework than you did in the spring. Maybe you are a working stiff and decide that you are too tired to have dinner in the 15 minutes between getting home and the raid starting and just say "Screw it!"

Or, maybe you aren't dealing with any of the above and are pissed off that not enough people are showing up to the raids.

Either way, the expansion blues are hitting guilds hard right now, even my own.

The sad thing is, I haven't been online in a month to really feel it's effects. I am one of those people that is pissing off others (though I hope not! I have a very legit reason for not being online).

Last week, I was suckered in to doing a boss fight (sucked is the right word, as in, I sucked) and stayed to listen to officer chat.

Recruitment is a good ole standby route to take in order to fill our thin ranks, as long as there are enough good folks left playing on the server to recruit. Then there is hope- hope that people will come back from their breaks and be ready to tackle the expansion.

With the tenative release of November 2 it is still a long way to go while dealing with low attendance numbers.

Are you hit with the blues and if so, how are you handling it?
at 6:47 AM No comments: