What I have been doing since the patch

After tweaking Kir's spec and feeling a little more comfortable during raids, I loaded up my other characters. I kind of think of it as a trial for who I wanted to delete after cata because I need to make room for a goblin, duh!

I have been having a blast on my hunter. While I see a lot of whining from the hunter boards, I myself am enjoying the class.

The expanded stable and new feature to call several pets kicked my "Gotta catch 'em all" mentality. See, Kir has roughly 109 companion pets and so the idea of collecting pets that actually do something rocks.

I decided to keep Beast Mastery for the very reason to have more pets. And since pets bring a host of buffs to a party as well, I am having a wonderful time switching pets to suit the group make up! I don't know who Zee is, but this flowchart is very handy for a new hunter. (Thanks, Aspect of the Hare, for the link)

My favorite huntery moment so far happened last night. I pulled out the corehound for the boss and promptly used Ancient Hysteria. Forgetting we had a shaman in the group, the question arose "Who has the offbrand bloodlust?"

Me:"I am sorry if I stepped on your toes. I don't normally run with a shaman."

Comments of LOL and "Yea, right" followed. Then I linked the flaming pup's ability to shut them up. I know it probably pisses off Shaman just like giving Replenishment to other classes pissed off Shadow Priests, but as a leveling hunter I can't rely on prime buffs to be had.

As an aside, I was happy to see Arikara still arrives in a puff of smoke. I was afraid that Blizz would have removed it somehow.

Wishing I could tame flaming horses

So what have my friends been doing since the patch? Well, my brother, despite having the HHM on 5 characters, still can't find a toothpick to complete his mount achievement. Other friends hate him for having his mounts when they don't have even one.

I don't care about the mount (though it does call to that collector in me) but here is something pretty and almost equally as cool: 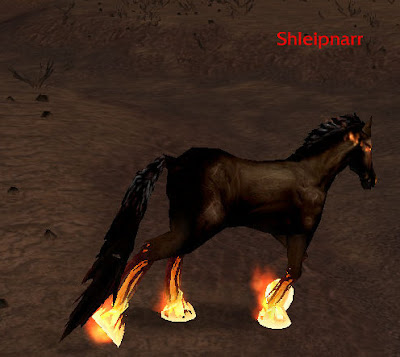 So far, the hunter will still be around after Cata. My shaman, however, will probably die. I would rather delete one of my alliance characters, but sometimes it is nice to have a spy over there to pick up vendor items to be transfered over (tee hee). There is still my blood elf mage I may ditch... we shall see.

Good luck to all of you trying to complete your Halloween achievements!
at 4:41 AM