Things to do after the Shattering

Now that the world has changed, there is certainly a fair number of things to work on before "Cattakissem", like getting pets, finishing up titles, etc.

Warcraftpets.com has the latest on the pets they added with this patch, including one they squeeked in called Tiny Flamefly. Perks N Peeves has recent information on this pet. I will add that once I was done in the Thorium Bros area, I had to head to Flame Crest to pick up the rest of the chain. I didn't get a breadcrumb to go there, so it could easily be missed. 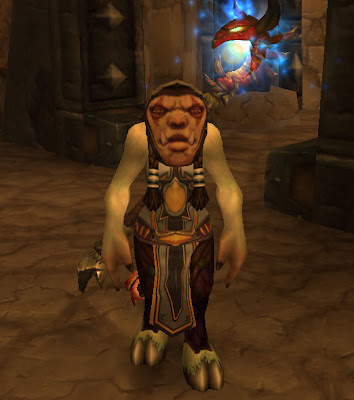 Somehow, this was a convincing disguise for the Blackrock folks.

Fans of Plants verses Zombies may already be prepared to get their Sunflower pet. Guildies who had never played the game before had a bit more of a learning curve for these quests, much to some frustration. Still, kinda neat and a chance to get "Zombies on your Lawn" song stuck in your head.

Fiona in Eastern Plaguelands has a few quests to offer as a set up to get her Lucky Charm buff from the Caravan. Your mileage may vary, as they say, but expect to take a bit of time to get Mr. Grubbs. Interesting sidenote: Slime covered bags from the grubs dropped a new plant: Dragon's Teeth. Well, really it's an old plant called Wintersbite. Not sure why the name change.

Finally, in Darkshore (which looks killer now!) there is a Forsaken in a cave which sells Withers. He shrinks then grows when near water. How cool is that? 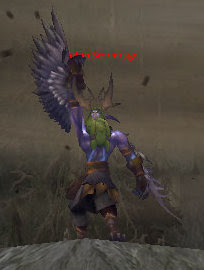 Not just Stayin' Alive, but also causing havoc in Darkshore.

The dailies for these are open and so are the Cata cooking recipes bought with the daily rewards. What I didn't know before was that each daily also rewards skill ups on their corresponding profession. Very handy later.

Debated on working on Limnologist and Oceanographer. It's a lot of fish to catch, which could be be used toward the guild progress in Cata. However, I didn't want to be bogged down by having to back track to Northrend and Outlands. In addition, as a friend pointed out, I would kick myself for not getting Winter Squid now. Would be too easy to skip it until it is too late. Check out El's page for more information on where to catch your fish (link is on the right hand side of the page).

It is so much easier to see progress now. But oh my, I didn't realize how depressing it would be to see so many zones drop to zero. To start over seems like a drag but I was just too far away from completely finishing it before the patch.

Some of the quests are a bit of a pain to do at max level, like letting a level 6 hit you to poison you for example.

Don't forget to do take a Joy Ride in Azshera (it's recommended to go North to South) for an easy achievement.

You can't fly in Azeroth, but you can in Dalaran, now.

The new Trollish Cat forms look rather neat! I would seriously consider a race change if I wasn't broke.

The new tabards don't seem to be working properly, but you can get the new Goblin tabard in Org at the Darkspear area. Just look for Frizzo Villamar. (Sorry Alliance, not caught up on my info for you guys. It's exhausting enough to figure out the Horde!)