As I am sure you know, there is a lot of crap being thrown around in Ulduar. After some discussion several weeks back, a priest and I thought it would be helpful to see who is taking what damage and when.

Sadly, we were slow to realize that GridStatusDebuffs was an actual mod. However, we found that it added too many things that we didn't want to keep track of.

Instead, we have manually added the debuffs we wanted to track.

Not all of them we use, still. Some like Biting Cold would like up Grid like a Christmas tree, though there is some usefulness to be had when you see someone with it for long periods of time.

To set it up, either go in the interface menu or click on the Grid mini map icon. You should see it look like this:

Just left click on the Auras section and this window should appear on the right: 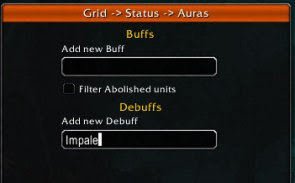 In the debuffs section, just type in the debuff you want to monitor and hit enter.

Grid is customizable as far as how you want to track buffs and debuffs. I already use the corner boxes for my hots and the borders for poisons and curses, so I decided to use the Center Icon for the Boss debuffs.

For that, you will need to go under Grid configuration again, Frames and Center Icon (or whatever you choose to monitor it from). All the debuffs you wish to track just need to be check marked like this: 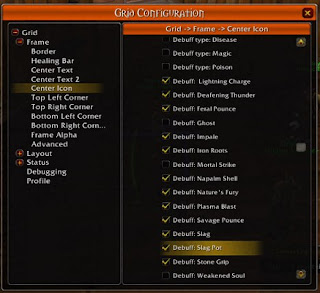 By using Center Icon, a small graphic of the debuff will display in the center of the Grid box of the player.

There is a little lag time between when the spell is cast and when the icon comes up. However, it does reduce the amount of time it takes for the healer to find the target in the grid, which ends up saving raiders.

Still working through which in the Plusheal list counts as "buffs" and which are "debuffs" so I still have some tweaking to do.