It's not your fault.
Being casual is not killing WoW. Being hardcore is not either. Neither is being a pvper beast, habitual farmer, 5 man junkie, or alt fanatic. How you play the game has about the same impact on how Blizz designs and treats the game as much as the next guy.

See, the debate was posed on a more than a few blogs, notably Tree Bark Jacket and Jacemora between casuals and hardcore.

Being in a guild that's somewhat in between, I find it hard to choose a side (not between them, but in the debate as a whole). I have never really cared too much. I have only been in a top guild once and the schedule was too demanding. I have been in a "casual" guild and there wasn't enough action. Hence, my participation in a casual-core guild (my brother's term, not mine) where I can have that balance of both. If I need to step away for a few days because of classes, my guild will let me. If I want to raid every night of the week, someone in the guild has posted a raid or I can form my own.

However, what makes someone a casual, at least for our guild, is someone who would prefer to not raid at all or raids so occasionally it ends up being more headache and work for them to try to fit into our rotation. Taking this definition further, let's look at the state of the raider right now.

Because Blizzard has put in parallel progression, being in a 10 man guild is not long considered casual. Period. Done. 10 man guilds all over are busting out progression just like 25 man guilds. So, what makes them casual? The fact that they are happiest as a smaller guild? That they choose to not merge with another guild or leave for a larger guild entirely? Their gear ilevel is not the same as others--which I argue hard mode 10 man is higher ilevel that regular 25 man and the item levels and itemization are very similar in many cases--or they don't have legendaries?

Casual:
1. Occurring by chance.
2. a. Occurring at irregular or infrequent intervals; occasional
b. Unpremeditated; offhand

This is not to say those who play casually don't care what they do inside the game. Raiding casually does not have to mean flippant or ambivalent raiding and playing.

I want it all!
I disagree that WoW should be accessible to everyone if the reason is entitlement. Just because I pay for the game does not mean I am entitled to everything for that reason. Blizzard has chosen, from the start, to make the game more user friendly that its predecessors and continues to stay competitive in the market because of this choice.

Reminds me of a learning curve chart a friend posted on our guild website last year. 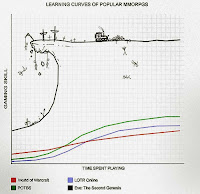 Some games just prefer to have a sharper learning curve than others and that works for them. Other games like to have complicated combat systems, while others have tried other "hooks" to make their games stand out. All of these are choices and those who play the games can either accept or reject those choices. I am not sure I could say because I played a certain game I should expect to see everything the game had to offer. Maybe that's just how I look at things. But that goes back to my oldschool days. Sure, I may have beat the game, but did I get that damned Golden Chocobo? No. Did I try? Yes, but I didn't and does that mean the game was somehow less enjoyable because of it? Not for me and I am ok with that.

Not an island.
What we might want to look at is how we all fit into the larger picture. Putting on my sociologist hat, I can't help but to see our game as a large social system. I mean, I already feel that as gamers we are part of a subculture.

There are over 10 million subscribers all over the world who play this game. And through out this large game, subsections of the social structure play their parts. Blizzard is now not just a developer but also a government managing everything in order to keep where we play fun and enjoyable. They have chosen to pay a nod to each group of folks.

This also means managing a lot more in terms of game mechanics and game design. Holy Dueg! mentioned that WoW is special from other MMO's because it actually takes in a lot of feedback from it's player base. Again, this may be due to the accessibility of its forums and the money they is willing to spend on hiring people who look at forums all day. The fact remains, it does want to listen to the players. Downside to this is when one group gets more attention over another group, tempers flare and jealousy abounds.

"Well, its my 16 bucks a month! I am paying for this service!" I am sorry, but this has grown to be much bigger than you. Yes, Blizzard is providing a service, but each one of us represents a separate section of a population.

All of these changes: mounts, traveling, leveling, gear acquisition, raid access, are all things the designers are doing to enhance the way each player interacts with the game, and ultimately, each other. I am not saying I am on board with all the changes every time. Please believe, the mount change makes me sad as does the ease of which getting gear will be. But looking at it in a different light, I can at least understand why the changes get done.

(Small rant: Don't ever complain about traveling until you have played EVE Online. Seriously. Getting from Minmitar space to Gallante the "safe" way beats anything I have done in WoW.)


In short.
Whether or not you are here for the social aspects of the game, chances are what you do in here affects others around you, thus making you part of the social structure. What Blizzard does also affects not only the game play, but how we feel about as a collective group of people. While you may have the right to get all hot and bothered over something, how you deal with it ripples far wider than you might think.
at 8:58 AM