Where do you stand?

We all know we have certain places we need to stand during boss fights, but what about during trash?

See, a lot of trash either throws out cone and aoe effects which tend to rip through the raid has they crowd around each other.

But what if there are other places to stand?

Maybe its the trash tedium getting to me, but I tried to find different places to stand. Of course, it doesn't always work out well for me. I get teased every raid for being in front of the trash leading to IC. "There's a warm spot up near me," says the MT. Yes, I took some fire damage and died rather quickly.

The goal of my placement hunting is to just be away from everyone else. I don't like clumping in a group while folks are frozen in place yet zapping the heck out of us. Or, eating hurricanes. I'd rather give them than receive them.

Of course, sometimes its helpful to be close to others, especially when the raid damage is unavoidable. At that time, you want to clump with others for the aoe heals. But when the damage can be avoided, why put yourself in harms way?

I am the tree in the foreground. The picture is small, but notice how the bulk of the ranged are in a nice little group in the center with just me and a hunter away from the group. If I am the target of those tornadoes, it will make a straight line to me, but won't hit everyone else. I will just shapeshift to travel form, run straight up the ramp and no one is pwnd. If you choose to stay in that little group over there, make sure you run in a straight line behind you so that folks can scatter away to the sides. Otherwise, its just going to be a lot of bouncy bouncy.

Being away from others is easier as a healer. As long as you are close to the tanks and the bulk of the other raiders, you don't need to be right up in them. 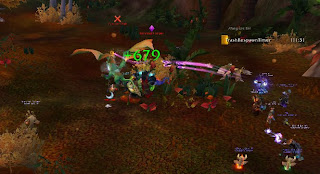 Again, off to the side. 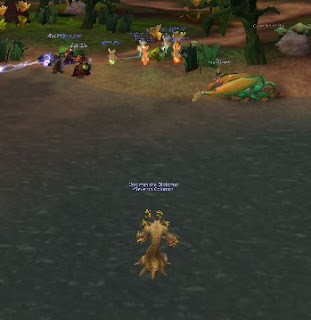 Here, I made use of a water walking potion. I stand on the pool, away from everyone else. If I do end up taking damage, thus falling in the water, I just stay in there. Being in the water a little won't stop my heals. If I get concerned about a hurricane, I move up to the land, but still away from the bulk of the fighting. By the way, being on the pool also works well when I have to CC the drake on this particular trash because I can pull him away from the DKs and Pally aoes.

Just about any trash has places I can stand that aren't in the line of fire. Hodir's trash is rough because of the narrow hallway. Mimiron's trash has me sometimes hugging a wall.

Also, I make sure I have a good camera distance and angle. Mine is constantly set beyond the standard maximum out of habit, which ends up being helpful when trying to see where I am standing in relation to all the bad stuff. I tend to angle it 3/4 style or even directly top down.

So, where do you like to stand during trash pulls?
at 8:05 AM

If nothing is going to explode in my face, whirlwind, or otherwise turn me into a pile of mulch, I'm almost always in the melee. Punching the mob.

I'm in feral recovery. After my switch from tanking/dps to resto, the first few weeks had me running up to things with the tanks and not healing stuff.

I am afraid if I run up there again, they won't see their tree ever.

Hehe, I may've been the same way if not for having time to play my feral druid, too. As it is, I've always had a habit of punching mobs as a druid healer, for OoC procs... back at 60, I was a resto/feral hybrid, so had the original melee OoC talent, and liked making use of it while healing.

I never let go of the habit :D

I agree with you on the hurricanes for Freya's trash, though... I generally flee from everyone on those pulls, I'd rather be the one creating lightening than being struck by it!