After an awesome weekend on the Aion beta, filled with pizza rolls and coffee, it was time to jump into 3.2 on WoW.

Of course, it was laggy, I crashed a few times, and there were too many people on the JC vendor, but I managed to at least get my Orphan quest done and try for one of the pet raptors in WC. All this while others in my guild tried the new 10 man and 5 man versions of the instance.

Apparently, everyone was going to be a black bear/cat which disappointed me. Kir has been a black cow since the start of the game and I must admit I was little upset and sad to have to change her. 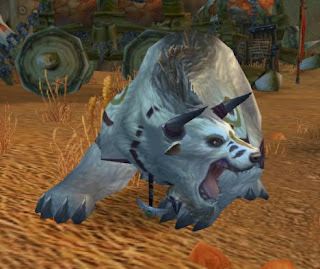 However, I like the white versions of the forms and I will be sticking with them for a while. MMO Champ has a good graphical layout of what you will look like with each color scheme.

Pets
I grabbed the raptor in Dalaran and finished up my orphan week quests to get my very own Wolvar.

See, I when the expansion first came out, I thought I would get one from doing their dailies, but I guess better late than never :) 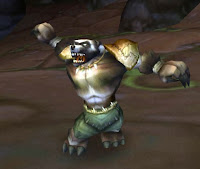 Only took me 20 runs or so to get the new Raptor from WC. 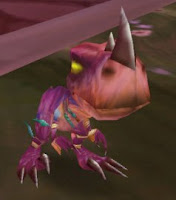 Now that everyone is off the freaking vendor, I can buy my patterns without too much pain. Our guild is separating out the patterns so some are taking tanking some are taking caster stuff, etc. in order to make sure the love is spread through the guild.

Nothing yet from the new instance, as our server practically died as folks were stuck in death and could not release. Hopefully tonight's run will be smoother.
at 8:46 AM

If everyone else is going to be black, then you'll certainly be standing out from the crowd with the new skin :) Though, while running around Dalaran, I mostly saw scar-skinned ferals on my server; the only black I saw was my own guildie, who's been a black moocow for years!