It's Orange and shiny! 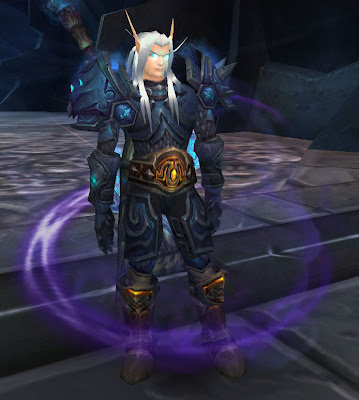 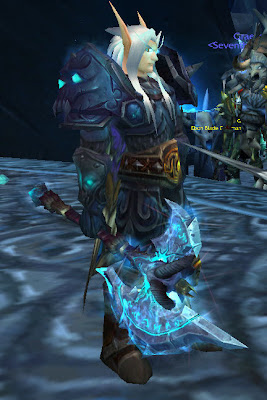 This is Relg, the owner of the guild's first legendary! We have missed every legendary due to complications (merging guilds, owner of shards leaving the server, etc) and so it feels good to finally see one completed.

And to be honest, we would have stopped doing ICC a while ago if I had not been for this legendary. Hopefully, this didn't put too much pressure on the poor DK but it was something that needed to get done. (Note that I embarrassingly called it a sword. Obviously, it isn't but I am a dumb healer so forgive me)

Regardless, congratulations Relg! I must say, having a legendary makes your metrosexual Blood elf a little sexier :P Oh, and we will hunt you down if you leave. Some of us have known you for at least 10 years and know where to find you!

Because this was our last night to do Icecrown on a regular basis, we also gave out prizes for those who participated in tonight's raid. The contest was this: What was the total vendor price for every item that dropped during the raid?

I don't quite recall the exact number but the winner had to come closest without going over.

This is a prize we have given out before but doesn't lessen the coolness factor.

Once again, I feel like we are just a little bit more awesome than some other guilds. We don't always get strats tight or maybe bring along some folks who aren't hardcore, but we do enjoy the company we keep. All this sentimentality just in time for the world to end!


Well done team and thanks for sticking it out.
at 9:08 AM

Haha well I don't plan on going any where any time soon, like you said I've been around a lot of you since the beginning here in WoW and some ever since the EQ days :)

But yeah I'm glad it's finally over. Now for some much needed R & R till Cata comes out.

P.S. I like your blog ;) Never knew you were doing one, it's fun to read and one of the few sites they don't block at work lol.