Every few months I take a look at my UI and make changes or tweaks. It's usually not the most sexy or even sometimes efficient, but sometimes changing things all at once just makes things worse.

I wanted to show what I was using largely because I had a guildmate or two ask about it. The rest of you are along for the ride! This first part will show Clique and Power Auras.

I still make changes but here is a screenshot of my UI just sitting there (well, with one low mana indicator but I will get to that) 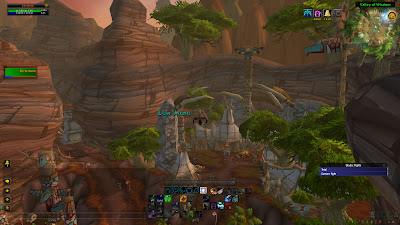 To break it down here is what I have:

There could be ways to make this even cleaner or smoother but it works for me. What I enjoy is the amount of so called Real Estate space on the screen. Since Cata, with healing circles and bad things on the ground, actually seeing stuff matters! To clutter your screen with too much stuff will hurt you and your raid.

If you haven't tried it yet and using mostly click to target methods, I would say this is a lifesaver. It may take some getting used to with the mouse keybinds, but after a while they will part of your muscle memory. I previously used it with Grid, but Vuhdo has an option to use keybinds through their mod or just import your Clique bindings (which saves a lot of time setting everything back up).

There is an option to create modes for friendlies, enemies and both so you can easily switch from dps to healing and back. Before I went feral, my Clique was set up for boomkin and resto and because of that I kind of ran out of mouse options due to laziness (Starfall is still on their but I am not spec'd for it now). I will spare you the full list but here's a screenshot of most of it: 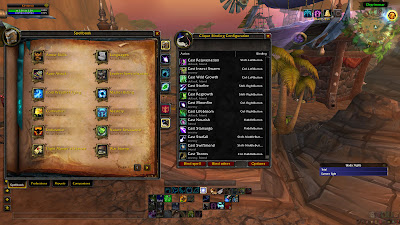 You don't have to go hog wild like I did if you are starting out. Even just binding your commonly used spells to a few buttons will help you see a difference in performance.


This one intimidated me the most. I didn't know how to begin so I started with tanking first since that's what I had the most trouble tracking.

I started with importing previously made codes by Krogarum at this link.

Not everything he had I was interested in so I chose the ones that mattered the most to me, namely Pulverize, Maul, Demo Roar, FF, Berserk and Lacerate. Barkskin was also important so I used Keeva's at TBJ. After that I tweaked with opacity and such to suit my needs.

For healing, I started mostly with the ones on TBJ but I found using symbols didn't translate well for me. I needed words, so I used the option called "Text Aura" and typed the words I wanted on the screen with the Moonstar font (but you can choose any font).

Edit: since this post I have discovered RestoDude's Auras and I found that I enjoy that set up of Omen of Clarity and Lifebloom reminders.

This gives me a pulsing "Innervate" on my screen when my mana reaches a certain threshold. Also, it has a sonar sound that isn't obtrusive but still gets my attention. All of this is helpful because I want to innervate early during a boss fight so it is back up in a timely manner. You can set the threshold to whatever works best for you.

This gives me a warning early that my mana is getting low and I need to make some emergency choices. Additionally, I wasn't happy with the default message blizz gave us so this new message is bright and circles around my character in case I missed it the first time. 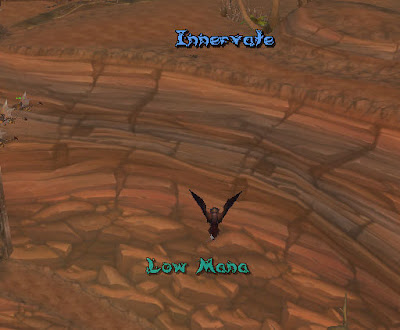 To use an string that someone has made, copy the code then open Power Auras (/powa). There should be an option to "Import" then Ctrl-V (paste) your new aura.

Honestly, it felt easier to make whatever auras I wanted after seeing how a pre-made was done. I think I spent an hour or two just playing around with it and seeing how it worked, giggling most of the time.

Later I will show Vuhdo and it's glory and a brief mention of FX.
at 3:56 PM