What a long, strange trip it has been.

It has been a long trip. Not the achievement but rather journey that a few of us began long ago.

The tale begins at the last remenant of the Amani empire as we sought to defeat its challenges with alacrity. As a reward, we were to be granted an Amani War Bear. Without upper class armor and weapons, we struggled to do our best as we ran through our enemies with precision. As we fought to get each member of our expedition team a trophy of their own, we were only able to retrive one before Thrall called us away to Northrend.

The call to Northrend provided a distraction from the fact that our efforts fell short in Zul'Aman. There were new foes and dangers lurking in this snowed area, and soon enough, our eyes looked to the sky and the floating citadel of a lich.

Alexstrasza tasked us with the defeating the enemies within Naxxramas and Obsidian Sanctuary. Some of us from the bear hunting days came in to try for the Reins of the Plagued Proto-Drake. Some, we found along the way as we explored the reaches of Northrend. As before, we fought hard through not only the frustrations of the task before us but an impending deadline. We got close to completing the challenges, but Sartharion proved to be our bane. Alas, as the leaders of Alliance and Horde asked their people to defeat Yogg-Saron, we had to put away our ambitions for a while. It was disheartening and we could only hang our heads as we set off to explore new areas.

Our next challenge came from an unlikely source: Brann Bronzebeard. Surely, a dwarf wouldn't spend his time seeking out Horde adventurers, right?

So we had to ask ourselves some tough questions. Did we even want to go through another set of seemingly impossible tasks only to have our efforts fall short yet again? Some said yes for the challenge of it, some agreed to go for chance at glory and fame.

Shortly after we started, rumblings of ill feelings went through our friends. They started seeing us go into to Ulduar at the same time every week and felt they were missing out on things. There were many reasons why we couldn't take everyone but were difficult to explain. We started to look elitist and exclusive, which was sad because as we were being pushed to our limits we did not feel like we were part of a special club. This was a difficult journey to complete; an onerous task on our shoulders.

Later, we started to see cracks in our resolve. People started failing to arrive at the designated times or began to lose their composure and their focus. Matters only got worse when Tirion called for us in his arena. Were we going to fail yet again?

Months went by. One by one, they started to go down. Freya, Mimiron, the General, until finally we met Yogg-Saron. Brann assured us that we could keep trying, despite forces being marshaled at the foot of Icecrown Citadel. However, we had been through this before and knew it only a matter of time before we would be forced to shift our focus again.

One Light in the Darkness

And so, the tale comes to a close. Did we succeed?

Oh my goodness, I just feel this huge sense of relief and sense of accomplishment. I didn't even want the mount in at the start (ok, the bear mount I did want, really really badly), but what was a bird going to do with a drake? Hell, even when we got our drakes in the mail, I had almost forgotten it meant a 310% bird speed. Of course, this led me to fly over Dalaran repeating "310 bird, 310 bird" in sing-song. 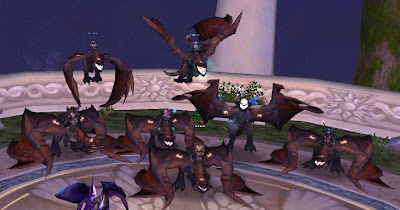 And finally, the biggest thanks to Anti for starting all off, keeping us together, and providing the chance to take me along on the most challenging experiences I have ever had the pleasure of being a part of in any gaming experience. Only took, like, forever, right?
at 4:45 AM

Roughly one year, two and a half months, all things considered, since we started this whole thing.